What do Lyme disease spots reveal? 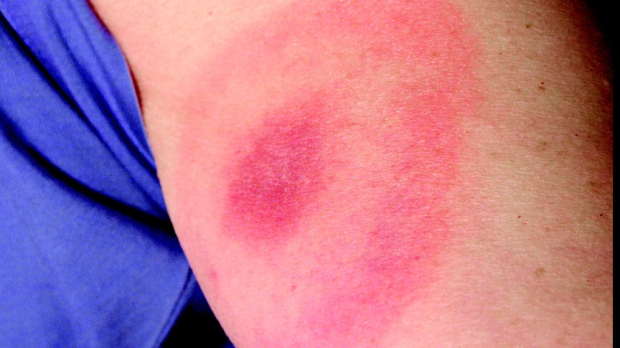 One of the typical, but not always present symptoms of Lyme disease is the rosette-like skin discoloration appearing at the spot of the tick bite, called the Lyme spot. A recently published study calls attention to the fact that specialists should follow much closer the appearance and spreading of the Lyme spot, as it reveals a lot about the infection process.

The early discovery and treatment of Lyme disease is difficult simply because the majority of affected persons either don’t realize they have been bitten, or the appearing skin spots – if they ever appear – don’t seem conclusive enough for diagnosing Borrelia, the bacteria causing Lyme disease. However, Lyme spots reveal a lot: by examining their appearance and spreading, important conclusions can be made regarding the behaviour of the bacteria and the stage of the infection, and the treatment of the disease can be much more effective – informs an article published in Biophysical Journal.

The study presents the mathematical model developed by specialists at the University of Arizona, which uses the appearance of the skin spots and the speed of their spreading as a base to draw connections between the behaviour of the bacteria causing the disease and the speed of its spreading, and the immune reaction of the body.

The example the researchers used is that in the case of the relatively common rosette-shaped Lyme spot a small-sized, evenly colored blotch shows up first on the skin. The immune response of the body is the strongest in the middle of the spot, so the majority of the bacteria are eliminated from this area within a week. On the other hand, bacteria situated towards the margins of the spot keep multiplying, and, as they spread, they provoke another response from the immune system. This is the reason why the skin discoloration gradually widens, meanwhile the inflammation in the middle of the spot decreases. However, after a while, new bacteria migrate to the middle area, which results in the appearance of the rosette-like skin discoloration.

With the aid of the model, it can be predicted how the Borrelia bacteria migrate in the body, and how the immune system reacts to them. In the possession of these data, specialists used simulation to model how various types of skin discoloration reacted to treatment with antibiotics. The results demonstrated that all Lyme spots had become bacteria free within the first week, but the disappearance of the skin discoloration took place in a wide range of time interval depending on the type of the discoloration. The results prove beyond doubt that it would be a mistake to make the treatment of Lyme disease a one-size-fits-all matter.

According to former research, it turned out that the group of bacteria causing Lyme disease use a unique strategy to trick the immune system – one more reason to find out more about the behavior of this pathogen. In addition, there is a significant resemblance between the bacteria causing Lyme disease and the pathogens of syphilis, which, according to researchers, may mean that the mathematical model presented above will serve in learning more about both diseases.