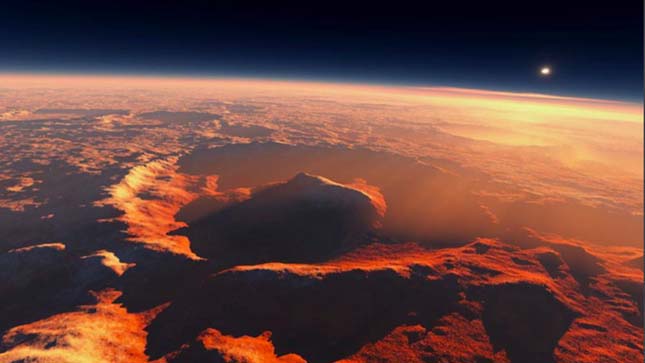 An insignificant, six times less than expected amount of methane was found in the atmosphere of Mars by Curiosity. According to a study by NASA experts published last Thursday in Science magazine, this result means there is very little chance that microbial life exists or once existed on the Red Planet. The findings are disappointing, as scientists used to hope that there is a significant amount of methane in the atmosphere of Mars, and gas emitting microbes live under its surface.

The Mars rover landed last year on the surface of the planet, in the crater Gale; since then it has been probing the air and looking for methane with the aid of a tiny laser. On the Earth, the existence gas is mostly the result of biological life; it escapes in the atmosphere as a by-product of the animal digestion and plant rotting processes.

Curiosity lacks devices that can search directly for present or pasts signs of simple life forms; therefore, scientists had high hopes that the rover will “inhale” methane as the sign of life on Mars. The basis for this expectation was that satellites orbiting the planet as well as telescopes on the Earth detected the presence of the gas in the atmosphere of Mars years ago.

‘If there were microbial life somewhere on Mars, a truly healthy and dynamic life form, it would have obvious signs in the atmosphere’, says Paul Mahaffy, a scientist at NASA’s Goddard-center.

During the first eight months of it mission, as spring turned into summer on the planet, Curiosity used frequently taken samples to examine the air on Mars. ‘Whenever we looked, we have never seen traces of methane’, says Christopher Webster, a team member at NASA’s Planet Research Institute. He called the results disappointing in many ways, but ne mentioned that the hunt for methane continues nevertheless. The reason is, this gas can be the product of non-biological processes as well.

Michael Mumma, another researcher at the Goddard Center, called the attention earlier to the mysterious methane explosions that occurred in three regions on the west hemisphere of Mars. The scientist didn’t participate in the present research, but he declared that he vouches for the correctness of his observations.