The incredible story of a Hungarian illusionist 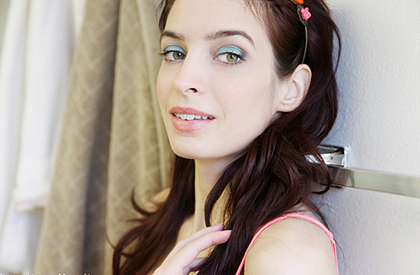 She was only five when she entered the world of magic; she worked in foreign countries at fourteen. From Los Angeles, Katalin Czékmann confesses about her initial difficulties, indecent offers received and lots of resignation.

If there are typical children’s thoughts, then probably the “when I grow up…” type statements are some of the most common ones. Do you remember wanting to become an astronaut one day, and a pilot or a president the next day? We firmly believed that one day we will achieve our dreams, but then, one day, reality hit us and we realized there is no Santa and no magic.

Blows from life hardened her

Albert Einstein once said that we can live our lives in two ways only: we either believe that nothing is magic in this world, or that everything is. Katalin Czékmann decided to believe in the latter.

At the beginning, she entered through the door of a cultural centre in Budapest with the idea to become an actress, but something else turned out to be her destiny. ‘The institution didn’t run an acting program, but just at that time an illusionist training course began. My mother asked me what I thought of it, and, without being truly interested, I decided to try myself out’, tells the young woman, still in her twenties, sitting a bit sleepy in front of the webcam because of the time difference. But when she starts telling about what followed, her tiredness disappears. ‘Soon I found myself making coins disappear, conjuring cards, and presenting my tricks at home to my parents and siblings. I come from a very solidary family, and they all supported my endeavors’, Katalin describes the beginnings.

First the young girl only regarded being an illusionist as a hobby, but, as she kept perfecting her skills, she realized that this was her calling. At ten, when other children were still playing, she was preparing for her first competition. A number of performances were behind her by this time, but this was the first occasion when she had to show her skills in front of a jury. By the time Katalin was 15, she won all professional prizes in the Czech Republic, Slovakia and Austria. She received a contract to work in Dubai at 14, worked on a luxury cruise at 16, and performed seven days a week in Los Angeles at 20.

She received indecent offers, but she always said no

Besides her perseverance, willpower and constant practice, Katalin can be thankful for her parents’ and excellent magician masters’ support for being able to reach her potential. ‘I am proud that I achieved everything on my own. I wasn’t born in a rich family, and my parents never worked in the show business, so they couldn’t help me. Of course, I could have achieved fame fast in various other ways (if you know what I mean), but I didn’t want to pay such price to become a recognized illusionist.’ The indecent offers only strengthened Katalin’s determination to build her career from nothing.

She didn’t count on many things: homesickness, for example, or the fact that she can’t keep a relationship going if her life lacks constancy. ‘It was difficult at the beginning, but by now I got used to seeing my family only once in three years. Love is a different thing… a long lasting relationship of mine has just ended because of my career. You can’t be with someone if you keep contact with him mostly through technology. It’s impossible.’

After we discussed thoroughly what a perfect relationship is like, I had one last question left: when could the Hungarian audience applaud in person the woman we are all be so proud of? ‘Moving back to Hungary seems rather surreal at the moment. I’ve just become a US citizen, and I have a lot of goals I would like to achieve here. On the other hand, it would be exciting to take various shows to Hungary, and I would be glad if this became possible’, smiles the young woman who entertained people in 52 venues all over the world, and celebrities such as Johnny Depp and David Copperfield bought tickets to her performances.

As Katalin explains, the most wonderful feeling is that the every illusionist she knows acknowledges her talent. ‘A while ago I took part in competitions, but by now I am so appreciated in the trade that I am invited as a special guest to the same competitions, such as the Illusionists’ World Championship held in Britain last year. Besides, a Japanese TV station contacted me and it looks like soon my short movies uploaded on the Web will be shown on TV, too’. Katalin finishes the conversation by adding that now, while commuting back and forth on the Los Angeles-Las Vegas-Peking route, she feels that her career has reached its peak.

Her major prizes and nominations