With two hard-working little girls, doing laundry is not very hard. The twin girls in the video help their mother with so much pleasure that the time of putting the laundry in the washing machine becomes a lot of fun. 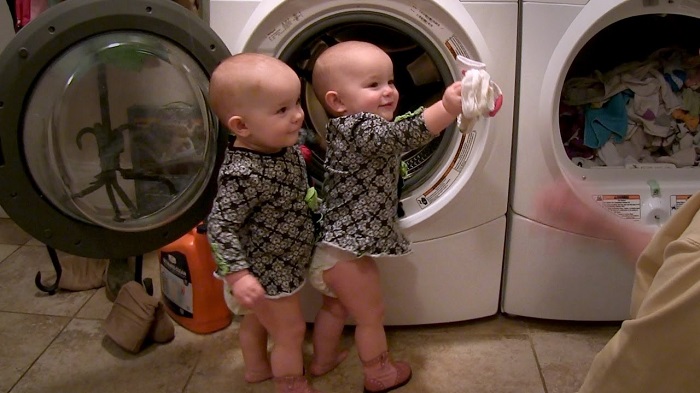 Looking after a large family, in this case composed of 12 members, involves doing a lot of laundry. Fortunately the mother has two helpers: the toddlers are trying to learn the secrets of household chores. It’s enough for their mother to tell them it’s time to do the laundry, and the little ones get to work.

The cuteness of the twin girls, only a year and a half, is priceless. They sort the dirty laundry, looking at their mother for approval, and enjoying their usefulness. Moreover, they know to show their mother that the laundry is really dirty, because it smells bad. The conversation between the mother and her little helpers is beautiful, and their relationship is very special.

After putting all the laundry in the washing machine, the girls add the detergent, close the door and show the mother that the start button has to be pressed. The mother takes one of the little girls in her arms and shows the buttons that the little girl has to press. After the washing machine is started, the other little girl wants to do the same operation as her sister. Undoubtedly, at the start of the next washing cycle, she will be the one to do it. A wonderful video!