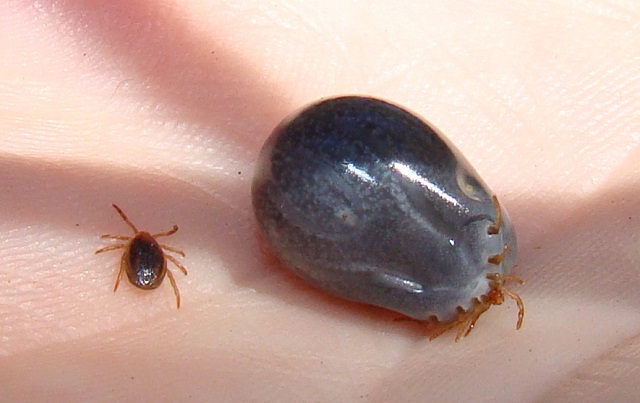 Ticks are parasites that belong to the family of arachnids, and feeding on blood. They can vary in size, from the size of a tip of a needle to that of a pencil eraser. The more ticks feed on blood, the bigger they become.

The color of ticks varies from different shades of brown to reddish-brown and black. Though they don’t give us such creeps as spiders or snakes, ticks belong to the category of animals (insects, in this case) that are extremely dangerous. Tick bites are usually easy to identify because the insects remain attached to the skin. Some ticks are small in size and are not so easily visible.

If a tick attaches itself to your skin, you risk having five serious illnesses.

Take great care when you go to a picnic, no matter if you choose a plain or mountain area. We are in the full tick season and Lyme disease is not the only illness spread by ticks.

Possible symptoms of the diseases transmitted by ticks are:

Here are 5 diseases that can be caused by this insect:

This virus attacks the nervous system in the first few minutes after being bitten by a tick. The virus causes severe headaches, fever and an inflamed brain. In 10% of cases, the virus causes death, and, unfortunately, there is no treatment to fight it.

Although humans are less affected by this malaria-like affection, it remains one of the dangers we expose ourselves to when we sit on the grass.

This disease is transmitted by a certain type of tick that is found in the United States. The disease is manifested by severe headaches, unbearable itching in the area of ​​the eyes and fever. The disease can be treated with antibiotics.

A tick called Lone star transmits the virus. The illness has first been detected in Texas, and it spread all over the United States. The virus frequently causes respiratory problems similar to those caused by extreme temperatures in the Middle East. Until now, no treatment has been found against the disease.

The disease caused by the bacteria called Francisella turalensis can be transmitted from any tick that has entered the skin. The disease can affect the skin, the eyes and the lungs and it can be treated with antibiotics if detected early.

How to remove ticks

1. Avoid areas with tall grass, as the ticks are less visible.
2. Always take along an insect spray.
3. When you get home, it’s advisable to check your head, neck, and underarms, ase these are the areas that are the favorite areas of ticks.