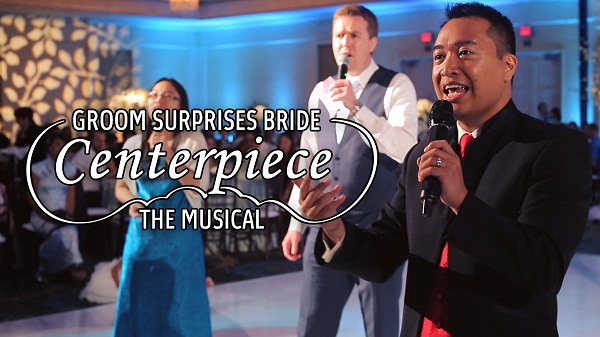 A wedding party is always full of heartfelt moments lived with maximum intensity by the wedding couple and the guests. Bus sometimes it happens that one member of the couple surprises his or her other half with a moment that will create a lasting memory – this is exactly what happens in the short movie below.

John wished to create for his bride, Irene, an exceptional moment and to show her from all his heart that she is the centre of his world. To accomplish this, he has plotted with the best man, the bride’s father and a friend to interpret the song entitled “Centerpiece”.

In the moment when the best man starts a toast in the honor of the wedding couple, a young woman sitting at a table stands up and, in a song, calls the attention to the richness of the floral arrangements, and the fact that they can be the center of all attention.

To give a reply to this musical passage, the bride’s father wanted to emphasize that his tie could be considered a “centerpiece”, not just the blossoms on the tables. The surprise became even bigger when the best man entered into this musical game singing a part of the musical and inviting his friend John to say a few words.

The groom started to sing a priceless and emotional declaration of his love for Irene, whose eyes filled with tears of excitement and joy. She got the proof that John loves him deeply and that she is the apple of his eyes. All the lyrics John sang have a special emotional charge. Everyone will remember this moment expressing the love will unite this couple for life.