The food of the queen that fights diabetes and Alzheimer’s 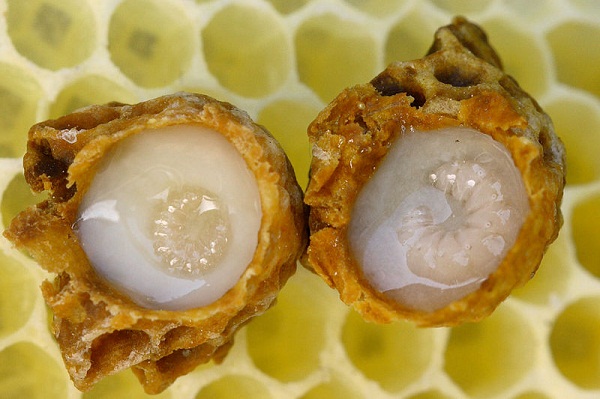 Very few know about the whole range of potential of royal jelly in promoting health.

Royal jelly is the least well known among bee products, and it is often confused with propolis. While propolis is produced and used for disinfecting and maintaining the beehive, royal jelly has the role of feeding the queen of the hive.

Royal jelly is produced by working bees with the aid of their hypopharyngeal glands. Working bees feed on royal jelly during the first three days of their lives, whereas the queen is fed exclusively royal jelly all her life. As a result, the queen grows double the size of a working bee, and she lives for 4-5 years, whereas working bees live for a maximum of 2 months.

Why is royal jelly a super food?

Recent studies show that royal jelly is very rich in in pro-hormones (the precursors of human hormones), vitamins, minerals, enzymes and substances with an antimicrobial effect.

Royal jelly contains water, about 10-15% proteins, 10-15% glucose, 5% lipids, and 2% other substances. It contains all essential amino acids and acids with an anti-tumor effect (such as the acid 10-hydroxy 2-decenoic), enzymes and co-enzymes, an insulin-type peptide recommended in every kind of diabetes, heterocyclic substances, acetylcholine (an important neurotransmitter), trace elements (potassium, phosphorus, iron, calcium, silica), and vitamins. The highest amount of vitamins found in royal jelly belongs to the B complex family.

Royal jelly has a significant content of acetylcholine, a neurotransmitter. This substance is indispensable for the health of the nervous system, and it can’t be found in any other natural product. This fact explains why royal jelly improves the mental health of persons of old age, and why it ensures a sense of well-being. Also, royal jelly treatment produces good results in cases of dementia as well.

Allopathic medicine uses medication to increase the level of acetylcholine, especially in cases of Alzheimer’s; however, not a single medication is a match to royal jelly, which, besides acetylcholine, contains numerous bioactive substances that ensure the efficiency of acetylcholine without the apparition of any side effects.

The researchers of NagaragawaResearchCenter in Japan have published several very interesting studies on the elderly. A study performed on mice shows that oral administration of royal jelly for 9 weeks has led to an increase of bone weight, of pro-collagen in the bones, and to an icreased quantity of ash resulting from burning the bones. This study has demonstrated what has been suspected by human medicine before: that royal jelly stimulates the formation of organic matrices in the bones as well as the mineralization of these, which makes royal jelly useful in treating osteopenia, osteoporosis, fractures and other affections that need ossification to heal.

Probably the most interesting study was a double blind clinical study performed on 60 aged volunteers between 60 and 78 years of age. For 6 months, half of the volunteers received daily 3 grams of royal jelly dissolved in juice; the other half of the subjects drank pure juice. Numerous blood analyses have been performed along with a psychological examination. At the end, the main results in the group that has received royal jelly were the following: a better mental health score (whereas in the other group mental health continued to deteriorate according to age), a higher count of red blood cells and hematocrits, an increase in the insulin index and a reduced glycemic index in the morning.

In other Japanese studies it has been demonstrated that depression is associated with the lowering of the multiplication rate of neurons in the hippocampus. Other Japanese studies have demonstrated the capacity of royal jelly to facilitate the production of new neurons, oligodendrocytes and astrocytes, which develop from the nervous stem cells. This fact supports the antidepressant effects of royal jelly.

As about Alzheimer’s disease, in Japan it has been discussed for years that an amyloid is responsible for the onset of the disease. This amyloid is, unfortunately, widely used in the food and cosmetics industry. In September 2012, Suzana la Monte, neuropathologist at the AlpertMedicalSchool at Brown University, Rhode Island, USA, has launched the hypotheses that Alzheimer’s disease might be the neurological expression of metabolic affection resulting from inappropriate diets. As a result, some specialists have precipitated to rename this illness type-3 diabetes. Therapists recommend in the treatment of Alzheimer’s 3-4 ml of raw royal jelly per day, zeolite (which eliminates excess metals, surplus, including aluminum) and an appropriate diet.

Along the years it has been noticed that in most cases a royal jelly cure increases the capacity of focusing.

According to the testimony of some students, consumption of royal jelly in large quantities during exams has a positive effect on memory.

Royal jelly contains biogenic substances that play a role in normalizing hormonal activity, helping in synthesizing those hormones that the body doesn’t secrete in sufficient quantities.

It has been observed that royal jelly is a good supplement food for women in the menopausal stage, who have a decreased level of estrogen, and also for women who suffer from infertility, helping them to become pregnant and maintaining their pregnancy.

Very good results have been obtained in treating infertility in women who had previously undergone hormonal treatment with no success.

Due to the complex effect of royal jelly, an increase in milk production has been detected in nursing women. Royal jelly provides the body with important vitamins and minerals, and it has a positive effect in in stimulating the mammary glands.

As a result of administering royal jelly, amelioration in cases of muscular inflammation has been detected. In the case of a patient with a painful inflammation at the elbow that persisted for years, the ailment has disappeared definitively as a result of a treatment with royal jelly prescribed to treat exhaustion. Positive results have been observed in cases of osteoporosis as well.

Royal jelly is a strong cardio tonic, which has beneficial effects on the cardiac muscles and blood vessels. Royal jelly is used with good results in reducing arterial hypertension.

This priceless product of the beehives is also beneficial in protecting the liver and in healing duodenal cancer.

The incredible effect of royal jelly in improving physical abilities has been observed mostly in cases of children. In neonatal pediatrics a growth in weight has been noticed even in children born prematurely, whose life expectancy had been predicted to be very short.

As a result of treatment with royal jelly, weakened old age people become stronger, their appetite increases, and their mental state improves as well.

Stressful situations are inevitable in day-to-day life. The way we react to them depends on how well we are able to tolerate stress. Royal jelly helps in being more resistant to stress as well.

Royal jelly is used in many cosmetic products due to its good effects on the skin. And it is actually very simple to make your own facial cream based upon this miracle ingredient.

Being a 100% natural product, raw royal jelly cream has spectacular effects on the skin and on the hair. Besides preventing the appearance of wrinkles and smoothing the existing ones, pure royal jelly stimulates the production of collagen, which maintains the elasticity of the skin.

In addition, a little buckthorn oil and monoi oil from Tahiti has been added (the latter can be replaced with coconut oil), both pressed cold, and having the role of protecting the skin from ultraviolet rays.