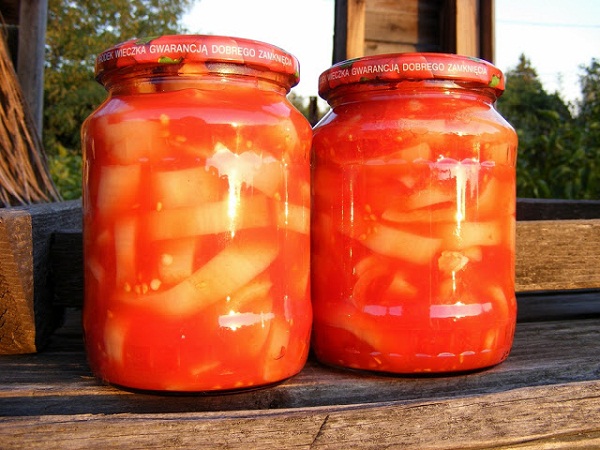 A dish made up of stewed tomatoes and peppers, flavored with onions or garlic, with some sausage added for the meat lovers is one of the traditional dishes in Hungary, also known abroad as letcho. If one wants to enjoy it in the winter, canned stewed tomatoes and peppers should be used to make it cost-efficient. However, many of us become puzzle when trying to keep peppers from turning mushy and preventing the mixture from going bad. The good news is that it is possible to keep the peppers crunchy and avoid using any preservatives.

The best letcho mixture is, of course, made from tomatoes and peppers that have grown in our own garden, under our own loving care, and which weren’t treated with any chemicals. And, naturally, they were ripened by the sun, and they were picked just when it was time for them to be picked. During canning, special attention has to be made that both the vegetables and the jars are perfectly clean, and the jars are closed airtight and heat-treated.

You will need about 4 ½ kg of tomatoes and 2 ½ kg of peppers after you have cleaned the vegetables and removed the seeds from the peppers. These amounts are only approximate, as the weight of home-grown peppers can be very different from the weight of store-bought peppers. Also, the weight of the tomatoes depends on their kind (juicy or less juicy – more juicy kinds are recommended).

Wash the tomatoes. Place the clean jars by the stove and prepare the lids or cellophane to close them. Put some water to boil. Cut a cross onto the top of the tomatoes and cut off the bottom. Throw 5-6 pieces into the boiling water at once and leave them in for 2-3 minutes. Their skin will loosen up, so it is possible to remove them in one piece. Make sure you are wearing gloves or using a fork, because the tomatoes will be very hot! Collect the peeled tomatoes into a pot and then crush them with a hand blender and boil them at the lowest heat. 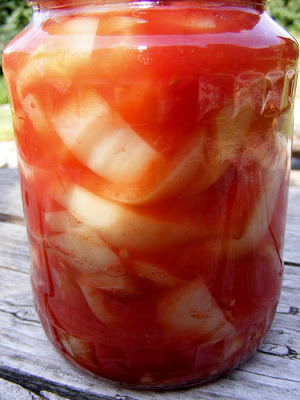 Wash the peppers and remove their stalks and seeds. Cut them lengthwise and then crosswise into slices. Divide the peppers into 3-4 groups. Pour the first dose into the pot with the tomatoes, stir and wait for about 2 minutes. Then, using a larger tablespoon, you start placing the peppers into the jars. When the peppers are all distributed into the jars and pressed down a little, the remaining space in the jars can be filled with tomato juice. Close the jars immediately and move them into dry steaming.* When all the peppers are out, the next dose may follow; the procedure is the same.

The time for cooking will change if the amount of the vegetables is significantly larger or smaller. From the quantity given, 5 pieces of 700 ml jars are filled. You can also add hot peppers if you like them. The photos were taken after the jars had been removed from the dry steaming.

Line a large basket with blankets in a few layers and place small pillows all around it. Cover them with an old tablecloth and move in the closed jars. Fold the blankets over the top and cover them with another pillow. Place another blanket over the top. Leave the jars in this nest for about two days to gradually cool down.