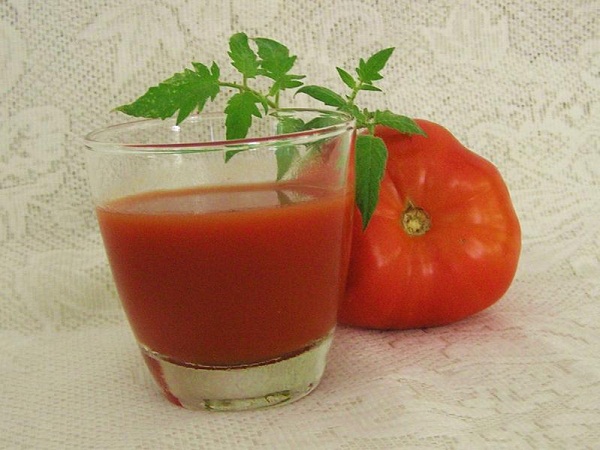 Homemade tomato juice is a very healthy and versatile canned food, but some may think it is complicated to can tomatoes this way. Originally, tomato juice was cooked in huge cauldrons for an entire day, until it reached the desired consistency. Some may remember how their mother or grandmother, from early in the morning, washed, cleaned, chopped, puréed and cooked what seemed like tons of tomatoes, and then puréed the juice and poured it into thoroughly washed bottles, which were ultimately closed them with cellophane. Evening arrived before the bottles were settled among cushions and blankets.

These memories may prevent many from trying to make their own tomato juice. Also, because we hear so much of the harmful effects of preservatives, and we may think tomato juice would spoil without it, we don’t even endeavour making any. However, it has turned out that there is no need of either salicyl or sodium benzoate to enjoy this red gift of the summer in the winter. Besides, it is not necessary to toil for a whole day to make tomato juice – it takes only a few hours to complete the procedure.

If you would like to do a perfect job canning tomato juice, it is the best to stretch the procedure over a few days. The first day, wash the bottles thoroughly along with their caps. Sterilize them by placing them into a pot of boiling water, and then allow them to cool down in the water. Then, pick them out with a pair of thongs, and place the wide-mouthed ones upside down on a tray lined with a kitchen cloth. If you prepare the bottles this way, you won’t need to use any preservatives.

Some may opt for he more time consuming method of peeling the skin off he tomatoes after soaking them in hot water for a few minutes. No matter which initial method you choose, after the tomato juice is cooked and poured in bottles, dry steaming in blankets and cushions has to be the next phase.

A good question to think of is whether it is really worth cooking tomato juice until it thickens. Most of the time water needs to be added when the juice is used in foods, although it would be much healthier to use the tomatoes’ own juice instead of tap water. Of course, if you use thicker juice in sauces, some of the juice may be thickened as well, but only as much as you think is necessary. The rest can be preserved by fast cooking, by boiling the juice for 10-15 minutes only. After that, it has to be poured into bottles fast, and then dry steamed as usual.

In many households, tomatoes are frozen whole or chopped up to serve as seasoning. There is better way, however, to preserve tomatoes for this purpose. When the juice is pressed out from the tomatoes, a lot of skin is left behind, which is usually discarded. It is worth, though, to add a little water to the skins, and then process the mixture on a blender until a paste is obtained. Pour the paste into wide-mouthed jars into which you can insert a spoon. Leave a two-finger wide space at the top, and cover the jars with two layers of cellophane with preservative powder in between the two layers, and then screw the lids on. Place the jars into a pot lined with kitchen cloths, pour water into the pot to cover the jars three-fourth of the way and bring the water to boil. Allow it to boil for 20 minutes, and then let the jars cool down in the water. In the winter, you can use this paste instead of cubed tomatoes.

If you choose to first boil the tomatoes, you will only need to remove the seeds and the thinnest layers of skin. In this case, you can make a similar flavouring by adding some chopped tomatoes and making a paste, processing them the same way as in the above case.

Some choose to flavor tomato juice, which is not a bad idea as long as not all of it is flavoured – if it is, every food we use tomato juice in will taste the same.

It may be a novelty to some that stuffing peppers should be canned at the same time as the tomatoes. Wash the peppers, remove the seeds and submerge the cleaned peppers in hot water to make them more flexible. Then, insert them into each other to make a stack as tall as the wide-mouthed jars you use. It is the most practical to use jars only as large as to hold enough peppers for one time use.

When the stacked peppers are stuffed into jars, tomato juice should be used to fill the jars. Shake the jars well so the juice reaches everywhere and no air bubbles are trapped. Also, make sure that the juice completely covers the peppers. After that, cover the jars with two layers of cellophane with preserver in between the layers and screw on the lids, and then place the jars among cushions and blankets for dry steaming or boil them as previously described, and then allow them to cool.

A final advice: after having bought or picked the tomatoes you intend to use the juice of, it is the best if you store them for a few days before processing them for an easier job.