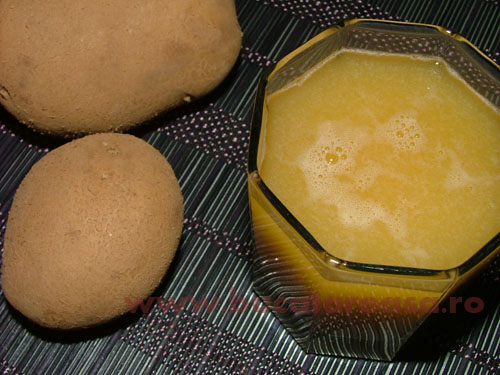 Commonplace and cheap but possessing extraordinary healing properties, raw potato juice is an extraordinary potion with huge healing capacities. It is widely used in treating gastritis, colic and gastric ulcer.

Legend says that during the First World War a group of starving German soldiers were restricted to an exclusive diet of raw potatoes. The results were amazing: soldiers suffering from gastric problems healed miraculously. After the war, the physician J. F. Magerl started to treat patients suffering from gastric problems with raw potato juice. After 10 days of treatment, the symptoms subsided in the majority of his patients. Whether this story is an urban legend or not, one thing is sure: raw potato juice is an excellent natural remedy.

Raw potato juice has healing and de-acidifying properties; these qualities make it effective in the treatment of gastritis, colitis and gastric and intestinal ulcers. In case of these illnesses, it is recommended to consume half a glass of fresh raw potato juice three times a day for a month. The most recommended kind of potatoes recommended in such cases is the red ones.

At the same time, potato juice has beneficial effects in cases of stomach ulcers duodenal ulcers and peptic ulcers. In the latter case, potato juice may be consumed as such or in combination with fresh carrot juice; sage or nettle tea may help as well.

Besides containing carbohydrates, potatoes boast with a complex and interesting chemical composition as well. They contain a significant amount of beta-carotene, vitamin A, vitamin C and B complex vitamins (B1, B2, B6, folic acid). Did you know, for example, that a single potato provides almost half of the recommended daily quantity of vitamin C and vitamin B6, and 18% of the necessary daily intake of iron and vitamin B3? Besides these, potatoes also contain potassium, calcium, iron, manganese, phosphorus, sulfur, copper, and fibres and proteins as well.

Because potatoes are among the most alkaline foods, raw potato juice may be useful in neutralizing stomach acid, helping at the same time to soothe stomach-aches. In addition, potato juice is also useful in reducing gastrointestinal inflammation. For the treatment of these problems, consume daily 3 tablespoons of potato juice half an hour before main meals.

Thanks to their rich mineral, potassium and organic salt content, potatoes may be considered one of the best anti-inflammatory foods. Consequently, raw potato juice, consumed frequently, may be used in treating rheumatism and arthritis, both being inflammatory diseases, but also in treating lumbago, articular pain and backaches. The juice acts as a good anti-inflammatory and it dissolves excessive uric acid deposits in the joints. For optimal results, try to consume raw potato juice in the morning, before breakfast. Potato juice may be consumed along with an infusion made from plants such as sage, nettle, garlic, catmint etc.

Potato juice is a natural remedy that has a beneficial effect on the digestive system, favoring its optimal functioning. At the same time, potato juice is used as an efficient remedy against some digestive problems such as constipation.

Raw potato juice favors the multiplication of beneficial bacteria in the digestive tract, helping at the same time in the prevention of the fermentation process in the intestines.

Because raw potatoes have high potassium content, the juice may be used as a remedy to reduce and maintain normal values of the arterial tension, and consequently in treating diseases of the heart as well.

Raw potato juice has a detoxifying effect in the case of certain cases of food poisoning; it is recommended to consume 2 tablespoons of fresh juice before meals, on itself or in combination with pure honey or fresh carrot juice.

Despite of the general belief, potatoes aren’t fattening (unless they are fried in tons of oil!). On the contrary, raw potatoes may contribute to losing weight, and they may successfully replace (if you tolerate their taste) cereals in weight loss cures. In this case, drink raw potato juice twice a day – in the morning on an empty stomach and in the evening 2 or 3 hours before bedtime.

Fresh raw potatoes have gained a lot of respect in naturist medicine, some people such as the Buddhist monk Tomizawa using it even in treating cancer.

Raw potato juice is recommended in the treatment of kidney diseases and in treating pancreatitis and diabetes as well. Drink raw potato juice to prevent the formation of calcium stones in the urinary tract.

Potato juice is also beneficial in reducing excessive dryness of the skin in cases when the skin doesn’t react to external treatment. To get rid of skin dryness and to protect the skin from toxins, drink a glass of potato juice daily. Persons who have used potato juice internally and suffered from skin problems such as eczema, the results obtained proved a considerable amelioration of the health of the skin.

Raw potato juice is used as a treatment against migraines that appear frequently, and also of constipation. To get rid of de constipation or to avoid it, a glass of raw potato juice diluted in lukewarm water very morning is an excellent solution.

Raw potato juice has a detoxifying effect and it helps in the cleansing of the liver. Every morning, right after getting up, or half an hour before breakfast, drink the juice obtained from 200 grams of raw potatoes.

Pay big attention when you prepare raw potato juice! You must always consume it fresh, right after preparing it. The potatoes you use have to be as fresh and healthy as possible. Because a large amount of nutrients are found in the skin or under the skin, you should squeeze out the juice without peeling the potatoes. But first make sure that the potatoes are 100% organic and there aren’t pesticide residues left on their skin.

Also, make sure that the potatoes you extract the juice of aren’t sprouted, green, spotted or dehydrated. Such potatoes contain a toxic alkaloid called solanine, which may cause diarrhea, nausea, headache, stomach-ache and dizziness when they accumulate in a large quantity in the organism. In addition, make sure not to store onions in the same bin with potatoes. The two kinds of vegetables emit certain gases and have a tendency to spoil one another.