Prisoners dance on Thriller of Michael Jackson with an amazing choreography 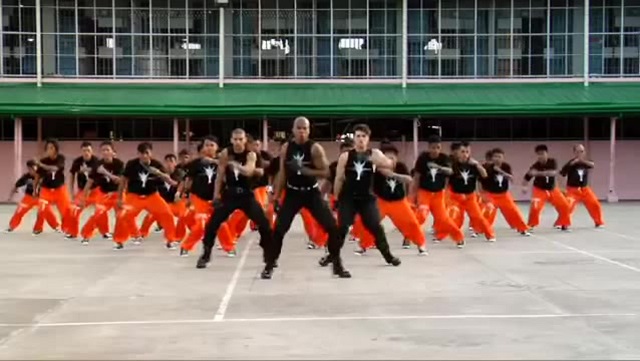 The Cebu Provincial Detention and Rehabilitation Center (CPDRC) in the Philippines is a maximum security detention center at which prisoners are serving very harsh sentences. However, another interesting thing made the prison famous this time, namely a spectacular dance choreography staged by inmates.

After their memorable performance of the legendary dance “Thriller” by the King of Pop Michael Jackson just months after his death, the detainees received a visit from choreographer Travis Payne and dancers Daniel Celebre and Dres Reid.

Travis Payne is none other than the choreographer who was in charge with the tour to promote the latest album released by Michael Jackson entitled “This Is It”. The tour, however, never took place, and he decided to teach the Philippines prison inmates a choreography that blends the rhythms of famous songs like “Bad” and “They don’t care about us.” Ironically, the official video of the song “They don’t care about us” was actually filmed in a prison.

Once the preparations were completed, everyone gathered in the main courtyard of the prison to show the result of their work, a tribute to the message that Michael Jackson tried to convey all his life. With the lead of the three celebrity dancers, a group of prisoners line up behind them and begin to execute the initial military steps. The strong attitude and the firmness of the steps make them into perfect dancers who manage to successfully convey the meaning of the song.

This first group of dancers form an arrowhead-shape, and then they are joined by an impressive number of other prisoners. The atmosphere created is downright explosive. To the rhythm of the song “They don’t care about us”, all detainees are staging the worldwide known choreography. The synchronization is incredible, and the video manages to leave us speechless.

The highlight is definitely the moment when the prisoners regroup and form the peace sign. It’s just amazing to see these detainees in a maximum security prison transmitting us this wonderful message. It seems that each of them had a lesson to learn during the preparation of this sublime moment.

Top 3 zodiac signs that are off to a good start in the coming year. 2022 is shaping up to be a happy new...