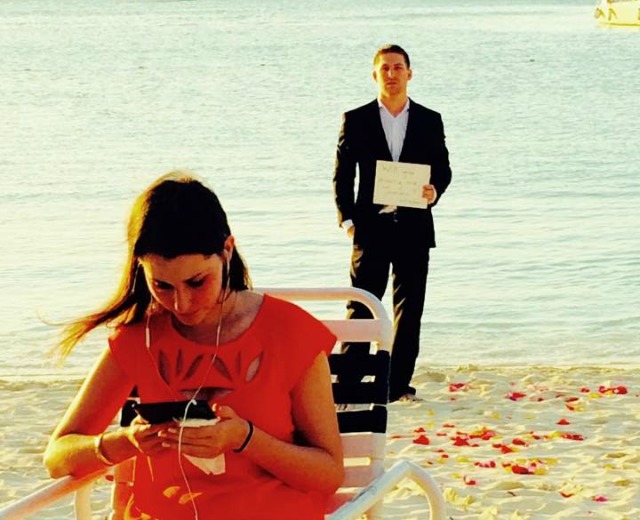 A proposal represents a turning point in the life of a couple, and the more thoroughly it is organized, the more memorable it is. You can’t help but become deeply touched and accept such a proposal, especially when a lot of people are involved to create the perfect context.

The video shows a very uncommon and very touching proposal. Dean Smith, a young man from Arizona, considered each day spent with his girlfriend a miracle, and for 365 days he took a moment every day to record himself expressing his love through messages written on cards. While at work, in the street, in his car, in the kitchen, in the bathroom or on a trip, he recorded his declaration of love and marriage proposal. All these images were collected in a movie which he gave to his girlfriend as a surprise gift on her birthday.

Now, after a year, Dean decided that the moment came to propose directly to Jennifer, and he asked for the participation of his family in this event. While vacationing in Aruba, they all conspired to surprise Jennifer.

First, Jennifer’s sister Jaclyn comes to her door with a written invitation to a birthday breakfast. Jennifer takes the invitation and goes down to the lobby, where her brother Jon is waiting for her with another card that asks her to head to the hotel bar. Of course, there she is given another card by Eric that prompts her to go to the beach, where her parents are waiting. Here, a very emotional mother gives her a tablet and asks her to watch a video that will no doubt explain the mystery behind all the messages she received.

As soon as Jennifer starts watching the video, emotions overwhelm her as she sees her boyfriend declaring his love every single day, and saying that he wants her to become his wife. The images are accompanied by “Marry You” by Bruno Mars, a song that Dean used to hum all the time. The last message at the end of the video is “Come back!” When Jennifer does this, she notices her lover who now has the opportunity to directly declare his love and make the marriage proposal he after keeping his wish a secret for 365 days. Such a wonderful proof of love!