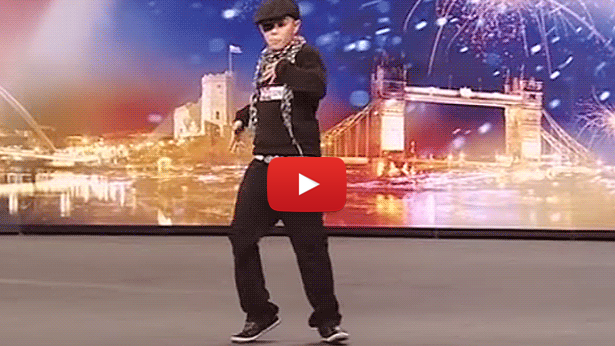 Aiden Davis is an 11 year old kid, student at the St. Thomas of Aquinas Catholic School in Kings Norton, Great Britain. One day he announced to his classmates out of the blue that he was going to dance in the show Britain’s Got Talent. Even his parents were completely surprised when Aiden asked them if he was allowed to sign up for the competition.

Even though he had learned how to dance in this style a year before, the boy proved to be very ambitious and perseverant. It’s definitely not easy to execute these movements in a perfectly synchronized fashion. In his dance, creativity, originality and energy are truly to be envied.

He dreamed up the choreography by himself, combining the elements of the dance in a perfect harmony, and he rehearsed them in secret in his bedroom only. His inspiration was the very George Sampson, the winner of the previous season of Britain’s Got Talent.

The jury was impressed by the boy’s performance, and all they had to day was praise. Even Simon Cowell described Aiden as “super, super, super talented”.

Aiden received a long applause, and the public was enchanted by his skills. As the result of the recognition of the boy’s talent, he has been invited to perform in many concerts, tours and TV programmes since the contest.